Three years after the Swedish triumph in Germany, Germans took the revenge in Sweden. It was shocking they already won on Saturday, because the Swedes were the favourites – they had the best player in the world (Wilander) while Edberg & Becker were at the similar level (Edberg won their two previous matches in 1988), so I’d say the most probable scenario after the first two days was 2:1 for Sweden after Wilander’s win over Steeb, Becker’s potential win over Edberg, and the much more accomplished Swedish duo beating Becker/Jelen in doubles… 3:0 for the Swedes couldn’t be extremely surprising too, however, Steeb shocked Wilander, Becker defeated Edberg easier than anyone could expect, and the Germans had an opportunity to clinch the title on day two. The Swedes led 6-3 4:0*, but the scoreline was a bit misleading – they won all five ‘deuce’ games up to that moment. When the Germans finally broke Jarryd for a 5:3 lead in the 3rd set, the momentum shifted. Admittedly Edberg went throughout the match unbroken (saved a break point in his opening game), but Jarryd lost his serve five times in total, and the Germans could celebrate their first Davis Cup title in 88 years after 2 hours 51 minutes as Becker played a backhand volley winner… It’s quite interesting that the Germans hadn’t played a forehand winner until 1-all in the 5th set, and then they produced three in a row (Jelen two), on Jarryd’s serve. 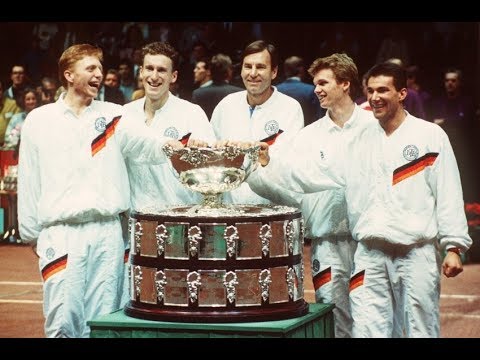